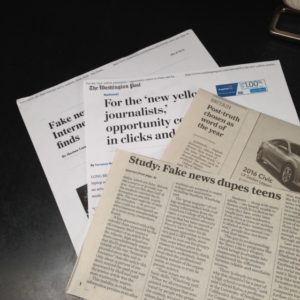 Actions throughout the world, as reported in the daily news, are disturbing. War, famine, violence, aggression and poverty are ongoing staples in the news cycle. Unfortunately, a significant new victim has emerged in recent times:  the truth. We now live in a post-truth world, at least in the political sense.

Most of us grew up, I believe, with the admonition by our parents and teachers to always tell the truth. The truth would always win out, and things would go worse for us should we be caught in a lie. Perhaps the fear of being caught in a falsehood was the biggest deterrent to not telling the truth.

These rules, however, seem to have gone out the window. The advent of faux news, and how it may have contributed to decision-making in the presidential election, has become a major topic in the news media. Faux news, i.e., the dissemination of lies, became widespread between 2015 and 2016, especially via social media.

The esteemed Oxford English Dictionary has chosen post-truth as word of the year. Use of the term rose by 2,000 percent in the past year. The dictionary defines post-truth as “relating to or denoting circumstances in which objective facts are less influential in shaping public opinion than appeals to emotion and personal belief.”  According to the Associated Press, runners-up for 2016 word of the year included “Brexiteer,” “alt-right,” and “hygge,” “the Danish feel-good philosophy connected to the British word hug.” Hugging; if only that had become the most important word of the year.

The news has been “rigged.” Increasingly, people rely on alternative news sources, usually on social media, as opposed to the careful research, attention to credible sources and validated details that are associated with real journalism. According to a recent analysis by BuzzFeed News, the top 20 fake news sites outperformed the top 20 legitimate news sites during the election season. Of the 20 top-performing fake news sites identified in the analysis, all but three were overtly pro-Donald Trump or anti-Hillary Clinton.”

So, who are these people behind the fake news? Profiteers, opportunists and the ethically challenged, it seems. “For the new yellow journalists, opportunity comes in clicks and bucks,” a recent story in the Washington Post, profiles two such web producers, now raking in big bucks through fake news. The nouveau entrepreneurs have been so successful that they now have an accountant, a lawyer, and employ other writers. Prior to creating false news, the two young college graduates were underemployed and frustrated, working in restaurants, scalping tickets, and selling water bottles at college football games.

Another propagator of faux news, a Democrat opposed to the alt-right movement, started out with the desire to show how easily false information can be spread. Along the way, he also learned that significant income is generated through ads and the dissemination of disinformation.

Faux news and post-truth have received wide-spread attention, and popular media sites, including Google, Facebook and Twitter, have vowed to crack down on the sites that disseminate disinformation. Fake news, however, is so widespread that it will be difficult if not impossible to regulate.

Some of our elected officials have shrugged off any concern about the possible effects of the post-truth era. While it appears unclear at this point if false information contributed to the presidential election results this fall, a new study, including a survey of more than 7,800 students by Stanford University, has shown that fake news or ads masquerading as news often fool teen and college students doing research.

Intelligent people must fight back. We must support our news media through our subscriptions and donations. Support professional journalists who do real research, have editors, and are held accountable for the accuracy of their stories. Read from a variety of sources.   Check out the sources of content before assuming that a story is true. Learn to recognize paid advertising and posts and avoid post-truth contents.

While it is sometimes tempting to shrink from the news, real or otherwise, to retreat to a place of peace, the price of ignorance is too great, and a real threat to our collective well-being. It is essential that we be informed, and to weigh our options based on true facts, not lies.

“For the New Yellow Journalists, Opportunity Comes in Clicks and Bucks,” by Terrence McCoy. The Washington Post, Nov. 20, 2016