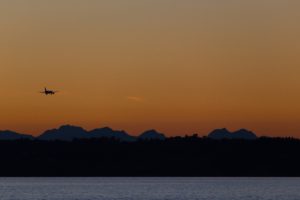 Joy is not a word that comes readily to mind when one thinks of flying. An airplane flight often involves getting up at the crack of dawn, waiting in long lines, struggling with luggage, flight delays, missed connections, and even unscheduled landings. Arrival at the final destination might be hours behind schedule, leaving the traveler overcome with jet lag. Bumpy air, lost baggage, intrusive conversations by fellow travelers, and other indignities are also among the hazards of air travel. The thought of crashing is high on people’s lists of things most feared in life.

But for me, flying is still special. The very idea of the technology and engineering involved in getting these huge, heavy aircraft up into the sky continues to fascinate me. As with any air traveler, I have had my share of negative experiences, but even those do not dampen the excitement induced by the thought of flying to a destination thousands of miles away in but a few hours of time.

I arrive at the airport up to two hours before flight time, with a good book and my laptop in tow. This allows plenty of time for check-in and a brisk walk through the terminals (getting the circulation flowing before being confined to a small seat for several hours), browsing in the airport bookstores, and enjoying a cappuccino and a snack before flight time. Flying out of San Francisco International Airport (SFO) includes the benefits of a quality local independent bookstore, museum-quality exhibitions, and a broad range of concessions serving good food.

The window is my preferred seat on the plane, so that I can watch the take off and ascent (feeling only a slight touch of anxiety), until eventually we are flying through or above the clouds. The in-flight safety video of Virgin America has become a bit of an earworm. Midway en route, I start to track the flight location and time on the in-flight map, as various parts of the country pass below.

Most likely, this level of enjoyment and naivety would not be possible for a frequent traveler. My air travel, other than for a few professional conferences, has been mostly limited to vacation and/or family-oriented destinations, fewer than a half dozen trips a year.

My first flight, at the age of seven, happened at a time when flying was still glamorous. People dressed up before getting on an airplane, just as they would for dining at a nice restaurant or going to shop in the city. Dresses or skirts and sweater sets were de rigueur for women, as were suits and ties for men.

The flight attendants, or stewardesses, then all young women, were hopelessly beautiful in their uniforms, and often signaled me out, as a child, to help them pass around a basket full of little boxes of gum prior to landing. The gum was meant to relieve ear pressure caused by the change in altitude and cabin pressure. I also “earned” several winged pins, courtesy of United Air Lines. On cross-country flights, one was served a meal on a tray, even in the main cabin, an amenity now rarely seen.

Oh, how I wanted to be one of those glamorous women of the sky! In elementary school, my friend Janice traveled extensively because her father was a pilot for Trans World Airlines (TWA). She had even met Haile Selassie, then Emporer of Ethiopia. She crushed my hopes by telling me that I would never qualify because I wore glasses. Oh, and you had to be pretty, as well.

By the time I reached adulthood, times had changed. Flight attendants had fought for, and earned, the right to continue to work while married. It was no longer legal to disqualify applicants or current employees on the basis of age, marital status or weight. Male flight attendants started to infiltrate the ranks. Having worked as a waitress in college, I now understood that working in the sky might just be more of the same hard work, standing on your feet for long stretches, dealing sometimes with cranky people, and not the glamorous job I had imagined.

Last month, on a cross-country trip, I encountered unanticipated delays. Starting out, I misjudged the time, arriving at the airport even earlier than usual. Due to weather conditions in San Francisco, there was a two-hour flight delay. I had a lot of time to kill at the airport.

Breakfast became first priority. Luckily, Zabar’s, that delightful Upper West Side deli, has a concession at New York’s JFK airport. I checked my email and read online news while enjoying coffee and oatmeal. Then I walked, or rather, paced, finished my book, and browsed in a rather unsatisfactory bookstore, but came away empty-handed. I bought a large bottle of water and a sandwich for the plane, which turned out to be a good move.

Finally, we boarded, some five hours after my arrival at the airport. But several hours into the flight, the pilot announced that we needed to make an unanticipated landing in Denver because the headwinds were strong, and the fuel was being depleted too quickly. After dipping and circling for a while, the plane landed with only a bit of jolting and came to rest on the tarmac, poised for a quick turn around.

A timely departure, however, was not to be. Continued stormy weather in the Bay Area had grounded all flights to SFO that were not already in the air. Passengers were getting restless at this point. Some international connections were missed. We all wanted this endeavor to be over. After a stuffy, crowded hour on the plane, it finally was cleared for take off.

The flight in and out of Denver was bumpy. A woman sitting in the row behind me complained.  “I hate flying,” she said. “This is not what I signed up for.”  I took a surreptitious look at others around me. All were stoically engaged with their laptops, movies or napping.

Leaving Denver, following a steep climb over the mountains, the air eventually became calm. The sun was going down, and the sky was darkening. The seat belt signs were off when, without warning, there was a huge jolt. The Virgin “Red” system flashed off, and the woman behind me let out a little shriek. Seat belt signs were back on in a flash. My seatmate, a 20-something young man traveling to San Francisco for a job interview, exchanged a momentary smile with me as the aircraft stabilized.

It was now 14 hours since I had left Brooklyn, with about two hours of flight to go. Out of reading material, not interested in the movies, I settled in to simply rest and relax. Heading west, the sunset was before us, elusively out of reach. The sky turned from bright orange to fiery red, to blush pink and burnt orange, and then back to red. The colors we chased were reflected in the clouds, until finally they gave way to darkness.

Ah, flying. The best part about it is getting home.

About Books and Reading

A Random Letter in the Mail