(Three United Parcel Service (UPS) drivers were shot and killed on June 14 at the UPS distribution center in San Francisco, CA, a tragedy perpetrated by a disgruntled driver, who then turned the gun on himself). 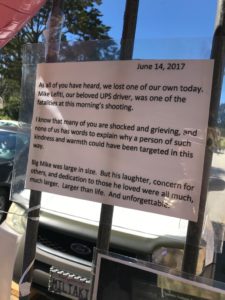 Mike Lefiti was a bear of a man and a cub of a boy.

Tragically killed on June 14, a victim of a senseless and inexplicable shooting at the UPS Distribution Center on Potrero Hill, Big Mike, as I called him when he was a 46-year old-adult and a16-year-old teenager, was my UPS driver and my American history student at Westmoor High School in Daly City.

I’d like to say I remember Mike as a student, but his classroom performance has turned into the blur that comes with a four-decade teaching career. As a kid, though, Mike stood out. His outsized personality, his larger-than-life smile, his velvet demeanor all set him apart from his 1980s high school peers.

That I can summon up, even through the haze of septuagenarian hindsight. 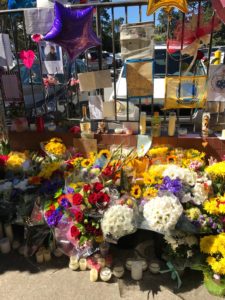 It’s certainly what I remember now, decades later – the times the grown-up Big Mike would wheel up to my house in his brown UPS truck, his megawatt smile igniting my tunnel entrance.

The doorbell would sound, usually around 5 o’clock.

Mike always stood, Gentle Ben-like, ready to deliver a shipment of wine for my wife or a chamois shirt for me.

He’d make me sign for the wine or the shirt, always inquiring, “How’s Mrs. Schneider?”

Mike was eventually reassigned to the other side of O’Shaughnessy Boulevard, but I’d continue running into him at Diamond Heights after mailing a letter or depositing a retirement check. He’d be sorting packages in the rear of his truck, wearing his signature UPS cut-offs and short-sleeve brown shirt.

I’d always have to share him with a bounty of appreciative customers. 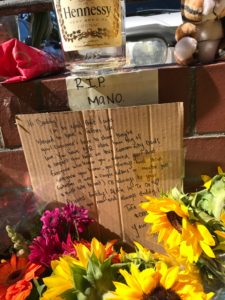 I never bothered to correct him, not like when I probably red-penciled him all those years ago if he mixed up Andrew Jackson with Andrew Johnson.

Predictably, Mike went on to have a family, three adoring children – two sons and a daughter. He’d achieved a rich and productive life. As Westmoor’s Social Science Department knew he would, he became a role-model citizen, an inquisitive and decent man, all ingredients threading their way through our best lessons.

Mike eventually moved to Hercules and chalked up 17 years with UPS.

A few years ago I ran into him on Crags Court, near its community garden. His truck was parked, which in itself wasn’t unusual. He sat behind the wheel, taking bites from a sandwich. 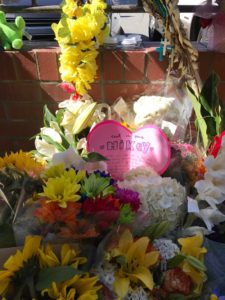 I asked him what was up.

In the distance, Mike could see the eastern slope of Glen Canyon descend into rich grasslands. Hawks scouted for their own noon-time meals. Down the hill, craggy rocks pierced the soil. A California oak stood stolidly, reminding me of him.

You can’t have taught as long as I did without running into former students. The AT&T lineman who scales utility polls in my backyard, the Comcast technician who drops by and fixes my Internet, the postman who pushes mail through my letter box.

I always preempt them.

Mike was special, though. He’d be positioned somewhere between the Safeway and Creighton’s in the shopping center, verifying addresses on packages, stacking cartons on dollies, or simply passing the time of day with his legions of friends. 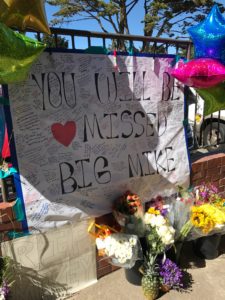 Like Mike, two other UPS drivers died that dreadful morning. Two others were wounded, and the shooter committed suicide as police officers approached him.

Leo Parker, whose UPS route is Glen Park, was present at the Wednesday morning meeting and witnessed the gunfire. “It was a horrible, horrible scene,” he told the Chronicle.

The day after the shooting, I sat outside a dentist’s office with my wife. We were a few minutes early for an appointment. A stack of packages sat on a cart in front of our bench. A UPS driver moved behind them. Soon he pushed them toward an elevator.

“How you guys doing?” I asked.

He looked at me for a long moment.

“He was my student.”

On the day before the shooting, on June 13, my doorbell had buzzed, only a few miles from the chaos. I didn’t recognize the UPS driver. He struggled, carrying two cartons of wine.

Watching him, I thought Big Mike, taken from us now, wouldn’t have lost a breath.

Reprinted with permission of the author and Glen Park News.

A Visit to St. Ives