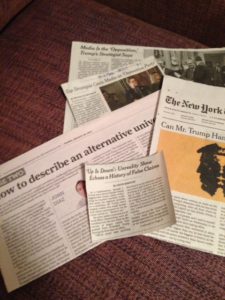 Although fake news was barely a blip on the screen prior to 2016, it already existed in abundance. Following the November election, many questions have been raised about the influence of fake news. Not only had an important election been at stake, but also the credibility of what we read and how we perceive it.

Fake news has now become a major topic of discussion. Not a day goes by that mainstream media does not shine light on a questionable statement, including “alternative facts.”

The President and his team refer to the mainstream media as “dishonest.” A senior White House strategist recently referred to the media as “the opposition party.” “The media should … keep its mouth shut and just listen for a while.”

So, what is a person to believe? And what about all of those fake news sites that look real but are completely bogus?

“Lies and misinformation on the Internet have become a focal point for many in post-election America,” said reporter Melissa Lang of the San Francisco Chronicle. “Companies, people and media organizations grapple with the fast-spreading falsehoods on discourse and politics.”

Lang goes on to cite a study by researchers at Ohio State University that hyper-partisan information is more likely to fall in the category of fake news. Companies like Facebook and Google, trying to combat this, are hiring researchers to weed out false information.

Fake news, no doubt, is causing confusion. A recent study by Pew Research Center reveals that 23% of Americans have shared fake news, either knowingly or unknowingly. “Americans express a fair amount of confidence in their own ability to detect fake news, with about four-in-ten (39%) feeling very confident that they can recognize news that is fabricated and another 45% feeling somewhat confident.”

But reality would indicate that the problem is widespread and hard to address. Sticking to the facts is helpful, if one knows what the facts really are.

Mainstream media is obligated to fact check their stories. If the same story appears in multiple mainstream sources, there is a good chance that it is true.

The news media has clearly caught on that people are concerned about fake news sites. A recent ad from Vanity Fair advises the reader to “Fight back with style..with wit..with insight..with unfake news. Subscribe now.” The New York Times suggests “No alternatives. Just Facts. Enjoy 40% off before our sale ends soon.” GQ tells us to “Connect with GQ. Do not participate in the … propaganda game.”

Public libraries are good sources when it comes to discerning truth from falsehood. Reference librarian Sally Ijams of the Darien Public Library (CT) recently made a presentation on fake news. “Be cautious with clickbait,” she advised a packed library meeting room. Be wary of excessive punctuation; beware of news that is too good, too weird or too reactionary to be true; beware of websites that lack contact information.

Like most people, I have my favorite news sites: The New York Times, San Francisco Chronicle, the Washington Post and NPR. Other sites that I trust include Reuters, The Wall Street Journal, CNN, CBS, USA Today and Associated Press. I enjoy news and commentary by Dan Rather on his site, News and Guts. I feel strongly that we should support the media, especially while it is under attack.

I also have made a vow to tune into other media with different points of view, such as Fox News, and hope I have the wisdom and tools to differentiate between what is real and what is fake news

“Up is Down: Unreality Show Echoes a History of False Claims,” by David Barstow. The New York Times, Jan. 29, 2017

What’s in the News