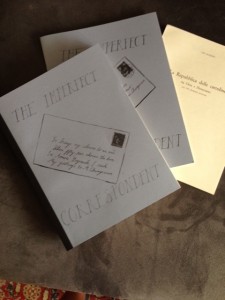 Ian Jackson of Berkeley, CA, has collected and privately published limited edition compilations of historical quotes on a variety of letter writing topics under the title The Imperfect Correspondent in Historical Perspective.

The collection first started with the subject of the tardy response to a letter. “I do not always answer letters promptly,” he said, “so I began 20 or 30 years ago to collect excuses for late replies.” With the collector’s zeal, The Imperfect Correspondent includes letters written in French, Italian, Spanish and English, ranging from as early as the 16th century to the early 20th century.

Letter writers who are guilty of late replies can find much comfort in these historic letters.   For example, in The Imperfect Correspondent in Historical Perspective No. 101, Jackson quotes Lewis Carroll: “… don’t fill more than a page and a half with apologies for not having written sooner.”  (from Lewis Carroll’s ‘Second Rule’ for ‘How to go on with a letter’ in Eight or nine wise words about letter-writing (Oxford: Emberlin and Son, 1890).

Mr. Jackson has also provided some historical perspective on “dead” letters. In The Imperfect Correspondent in Historical Perspective No. 113, he quotes Charles Sedgwick:

“I am surprised, dear Lizzie, that a person of your wise and generous mind should take such a contracted view of God’s good providence as to indulge in a strain of unbroken lamentation over the bonfire of dead letters. Of the two million letters that made that bonfire (a word most happily chosen), there were, probably, thousands that were dunning letters, thousands more containing promises made only to be broken, quack advertisements and sham notices, thousands and thousands with bad grammar, bad spelling, and nonsense worse than the spelling or grammar, thousands more, impossible to read and not worth reading, and probably about as many with love as with money in them. These are undoubtedly a loss, but only think, — and let your benevolence rejoice in the thought, — of the postages saved, the time saved in reading and filing and answering these letters. O, how I should like to see a bonfire of two million of letters. It is worth a journey to Washington to a person whose philosophical temper is undisturbed by a wild imagination.”

— Charles Sedgwick, letter of 3rd May 1848 to his wife Elizabeth, as printed in his sister Catherine Maria Sedgwick’s edition of Letters of Charles Sedgwick to his family and friends (Boston: privately printed, 1870), pp. 277 – 8.

In a Note to No. 113, Jackson explains that Mrs. Sedgwick was in Washington, D. C. As Mr. Sedgwick explained to their daughter, “I had a letter from your mother last night. She had just come from sight-seeing, and last of all, from the Dead Letter Office, where ten clerks were consigning to destruction about seven thousand letters a day. Your mother was shocked and distressed to think of so much love and advice lost, so many hopes disappointed, etc., such infinite treasures of love wasted, that might have strengthened and edified so many longing souls. I do not take this irreligious view of God’s good providence over such a quantity of illegible, incomprehensible, nonsensical manuscript, but rather consider it a blessing that He should determine the only practicable way of making an illumination out of it — by a bonfire.” [1]

While Charles Sedgwick may have taken a dim view of the quality of what generally was carried in the mail, Jackson notes “nearby and soon afterwards, Herman Melville composed his tale of Bartleby, the Scrivener. Its narrator, like Charles Sedgwick, was a lawyer. There he echoed Eliza Sedgwick’s sentiments, recording ‘one little item of rumor … not … without a certain strange suggestive interest:”

“The report was this: that Bartleby had been a subordinate clerk in the Dead Letter Office at Washington, from which he had been suddenly removed by a change in the administration. When I think over this rumor, I cannot adequately express the emotions which seize me. Dead letters! Does it not sound like dead men? Conceive a man by nature and misfortune prone to a pallid hopelessness, can any business seem more fitted to heighten it than that of continually handling these dead letters, and assorting them for the flames? For by the cart-load they are annually burned.

Sometimes from out the folded paper the pale clerk takes a ring: — the finger it was meant for, perhaps, moulders in the grave; a bank-note sent in swiftest charity: — he whom it would relieve, nor eats nor hungers any more; pardon for those who died despairing; hope for those who died unhoping; good tidings for those who died stifled by unrelieved calamities. On errands of life, these letters speed to death. 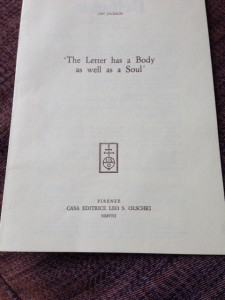 al thanks to Ian Jackson for sharing his research and historical perspectives on letter writing!

Gratitude: The Art of the Thank You Note