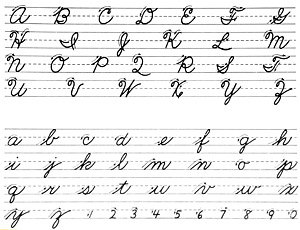 In Daphne du Maurier’s 1938 gothic novel, Rebecca, memorialized by Alfred Hitchcock’s 1940 film of the same title, the shy young bride of Maxim de Winter finds herself out of her depth in her new husband’s ancestral home, Manderly, overseen by the creepy Mrs. Danvers. The lingering presence of Maxim’s dead first wife not only intimidates her, but reminds her of her own seeming inferiority.

First, it is an inscription in a book, “written in a curious, slanting hand…the tall and sloping R dwarfing the other letters.” Mrs. de Winter responds, “I noticed for the first time how cramped and unformed was my own hand-writing, without individuality, without style, uneducated even, the writing of an indifferent pupil taught in a second rate school.” In another passage, she observes Rebecca’s handwriting as “That bold, slanting hand, stabbing the white paper, the symbol of herself, so certain, so assured,” establishing the tone for the novel.

Does handwriting still have significance? Certainly, it does not seem to matter to store clerks, who will accept any old scrawl on the credit card machine. In some cases, one is asked to “sign” the online receipt with a finger.

Most of us born in the 20th century learned cursive writing through the Palmer Method. Mr. Palmer’s classic, The Palmer Method of Business Writing (available for viewing in The Richard Harrison Collection of Calligraphy and Lettering at the San Francisco Public Library’s Book Arts and Special Collections and other special libraries) says that “students who follow absolutely the Palmer Method plan never fail to become good penmen. On the other hand, no one ever learned to write a good, free, rapid and legible hand from any copybook that was ever made.”

The U.S. is not alone in questioning the value of teaching cursive. According to the publication World Crunch, Swiss schools may soon eliminate cursive handwriting from the curriculum. “The country’s teachers’ association all favor eliminating cursive handwriting completely from school courses,” the article notes. Block printing would still be taught. The rationale for the recommendation is that the need to write swiftly in cursive has all but been eliminated by the computer.

Tyler Kepner, in his New York Times piece about baseball autographs, “In an Era of Squiggles, You Can’t Tell the Players Without a Handwriting Analyst,” notes that players often are required to sign hundreds of balls at a time. The result is far from distinctive and generally not even readable, but for the most part, the fans don’t seem to care.

Handwriting still matters in the field of forensic science (not to be confused with the largely discredited field of Graphology), employed by law enforcement. In a June 2013 conference on the standards for forensic analysis of documents, sponsored by the National Institute of Standards and Technology (NIST), an agency of the U.S. Department of Commerce, the conference program notes that “the forensic science discipline of handwriting examination and analysis initially surfaced as evidence in courts around 1868, when a forged will was exposed.” Contemporary forensic document analysis involves more quantitative and controlled data, the formal use of statistics and extensive peer review.

Whether or not cursive writing remains relevant in the future remains to be seen. But clearly, the days of our signature being a reflection of our unique identity are fading.

Royal Mail Delivers Your Letters – and Packages, Too!