With summer upon us, our thoughts turn to vacations. Beaches, perhaps. Points of interest. Ports of call. And where there’s travel, there are often postcards–short notes to let our friends at home know that they are in our thoughts while we’re having a fabulous time.

Postcards fall under the general category of correspondence but they are their own enigmatic form of communication. Concise. Often fragmented. Occasionally cryptic.
They are scattered throughout the Hormel Center’s archival collections. Here we’ve selected some examples that offer glimpses into the activities of Alice B. Toklas, Harvey Milk, and Christopher Isherwood.

Alice B. Toklas wrote a handful of postcards and short notes to Donald Frank, the nephew of a close childhood friend. In her characteristic spiky script, Toklas describes her vacation to Thouars, its proximity to the Atlantic and its “delicious” air, her dog Basket, and their dread of the train trip back to Paris.

In a second postcard Alice describes her 1954 trip to Grasse and Cannes, the markets there, the weather, and cooking on a spit in the garden. She makes comparisons to Portland, San Francisco and New Orleans and notes that her cook book is to be published. I particularly enjoyed her remembrance: “I loved seeing the old Mark Hopkins Institute where I danced at innumerable Mardi Gras balls!”

Two years later, in 1956, we have a few postcards from Harvey Milk to his friend Sue Davis. The first message simply says that Harvey has arrived in Miami Beach, Florida. But the front of the postcard has a beautiful color image of the Parada Hotel, complete with the yellowed marks left from when it was taped up on a wall or refrigerator. 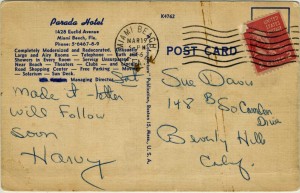 In a later postcard Harvey notes that he had to return to New York and will probably stay there for the summer. He writes “New York is a wonderful town. No place like it.” The front of the postcard features a snapshot of the Port Authority Bus Terminal and surrounding area from the mid-1950s and more yellowed tape marks.

And, finally, ten years later we have a postcard from Christopher Isherwood to Bill Upton. Isherwood was a British author known primarily for his autobiographical works and Upton was a friend who lived in San Francisco. In this chatty card, Isherwood mentions his own upcoming visit to Upton and the hope that they can rent a seaplane. Chris also describes a visit from the film director Tony Richardson and refers to his film The Charge of the Light Brigade, which would be released in 1968. We found these postcards and a letter inside a copy of Isherwood’s Exhumations that was inscribed to Upton and which he donated to the Hormel Center.

The Hormel Center’s archival collections contain many different formats of material: diaries, correspondence, audiotapes, videotapes and photographs, among others. The examples above are just a sample of one format.
The Alice B. Toklas Letters to Donald H. Frank, the Harvey Milk Letters to Susan Davis Alch, and the Christopher Isherwood letters to William Upton are available through the San Francisco History Center, 6th floor, Main Library.

Tim Wilson is a librarian in the San Francisco History Center at the San Francisco Main Library, and is the processing archivist for the James C. Hormel Gay & Lesbian Center. His blogposts about archives at the Hormel Center, and posts about other Center collections and activities, can be found at http://queerestlibraryever.blogspot.com/.”

Sometimes It Is Difficult to Love the Post Office