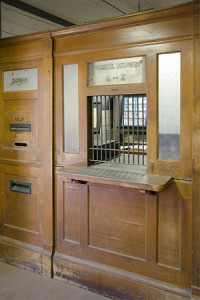 The people of Berkeley, across the Bay from San Francisco, know how to put up a good fight. Their most recent battle is to save their historic post office building from being sold by the United States Postal Service.

Berkeley, as is often the case, is going against the grain. Post office buildings and postal sorting centers around the country have been consolidated, sold, leased and downsized as the U.S. Postal Service struggles with monumental debt. Different jurisdictions react to these sales in different ways.

Palo Alto, another Bay Area city, made an offer to purchase their post office building and rent part of it back to the U.S.P.S. when it was listed for sale in 2013. The 70-year old building is listed on the U.S. National Register of Historic Places. The U.S.P.S. also announced plans to sell and downsize other Bay Area post office buildings, including offices in Menlo Park, Half Moon Bay and Sausalito.

Recently, consumer advocate Ralph Nader joined Berkeley’s now two-year fight to preserve the building as a post office. He spoke at a rally on July 29 on the steps of the historic building.

“Those of us back east, we look to Berkeley for leadership,” he said. “This (the U.S. Postal Service) is a fundamental institution that binds the country together…So let’s get more organized than you already are, and you’re more organized than any other group I’ve read about in this country to save the Post Office, but don’t let it go to your head…you know how to multiply.”

The fight was on when the potential sale was announced in June 2012. Activists, preservations and post office supporters rallied and drew together in support of saving the building as a post office. In January 2014, the U.S. Congress recommended that the sale be suspended.

Steve Hutkins, a New York University professor, tracks threats to the post office, including proposed as well as actual closures; cuts in hours; consolidations; rude employees; and more, through his website, Save the Post Office. The site lists 72 post offices closed, listed for sale or sold in 2013, from Annapolis (approved for sale) to York, PA (sold), including the Berkeley post office (listed).

Support for public institutions dwindles without resources and good public service. The Berkeley Main Post Office suffers from criticism and low ratings in its Yelp reviews, reflecting limited resources, and possibly poor training, supervision and morale. The wait for service is lengthy. These low ratings also are reflected in Yelp reviews of many other postal facilities. Still, the people of Berkeley care about their post office and will fight to save it.

Another celebrity post office advocate, one-time San Francisco resident and actor Danny Glover, spoke before the American Postal Worker’s Union on July 31, 2014. Glover, the son of two postal worker parents, also worked for the post office as a teenager, and vowed his support to stop privatization of this public service. “I’m in,” he said.

Using the slogan, “The U.S. Mail is Not for Sale,” convention delegates and supporters marched on a Chicago Staples store. One plan of the postal service to save money was to establish mini-postal facilities within Staples stores, including one in Berkeley, although it appears that the plan now has been abandoned.

The U.S.P.S. had an operating deficit in 2012 of nearly $16 billion. Increased mail prices and enhanced package shipping reduced the 2013 deficit to $5 billion, according to a news release issued by the postal service. Despite the increased revenue, however, the system continues to operate at a deficit.

The causes of the U.S.P.S. operating deficit are complex. Because of a  2006 Congressional mandate, the postal service must pre-fund retiree health benefits for the next 75 years, a requirement not exacted of any other federal government agency. This costs the postal system about $5.5 billion a year. In other words, without this onerous requirement, the postal system would be close to breaking even.

This is a commendable thought, and for many reasons, we all should be writing more letters, yet such a plan is unlikely to stem the changes taking place in how we correspond with one another. Yet, while it is still unknown at this point whether activists will succeed in saving the Berkeley Post Office, it clearly is not going away without a fight.

Letters to Myself: Alan Blackman

A Box of Old Letters