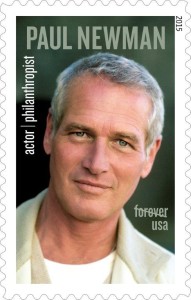 A ceremony was held in Cleveland, Ohio, Paul Newman’s hometown, on September 18 to celebrate the first day of issue of the new Paul Newman stamp.  Those in attendance included Clea Newman Soderlund, senior director of special initiatives, SeriousFun Children’s Network and Paul Newman’s daughter; Robert Forrester, president and CEO, Newman’s Own Foundation; and other charities supported by the late actor and philanthropist.

Another Hollywood icon, Ingrid Bergman, is also the subject of a new commemorative stamp, the 19th stamp in the USPS Legends of Hollywood series.  The stamp was released on August 20 at the West Hollywood Public Library.  Posten AB of Sweden did a similar release of an Ingrid Bergman stamp on the same day. 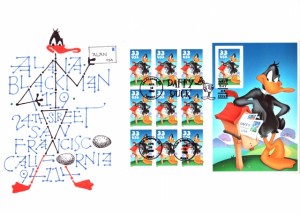 Letters to Myself, the spectacular exhibition of calligraphy by Alan Blackman, was recently reviewed in the San Francisco Chronicle.  Find that story here: Main Library exhibits calligrapher’s elegant envelopes to himself.  If you have not seen the exhibit, don’t delay: it closes on October 12.

Perhaps you are wondering how to obtain a first day cover of a new stamp.  The U.S.P.S. advises that one should first purchase the stamp, either through your local post office or from usps.com.  Address an envelope of your choice, either to yourself or another, and affix the stamp. Send in a separate envelope to USPS as follows:

Nobody seems to be in a hurry to sell the beautiful, historic Berkeley Post Office building these days, but what about Napa?  While much of Napa Valley, California has substantially recovered from the severe earthquake of 2014, the Napa Post Office remains shuttered.  With apparently $8 million dollars needed for repairs, the U.S. Postal Service determined that the most practical and expeditious course would be to tear it down and build a new post office.

The Napa Post Office is a handsome building, constructed in 1933 during the Great Depression, and is listed on the National Register of Historic Places.  In August 2015, the USPS agreed to put the building up for sale, rather than demolish it.  Save the Berkeley Post Office is now working with activists in Napa to prevent the sale and force the USPS to renovate the building and keep it as a post office.

Are there topics you would like to see covered in Social Correspondence? Please let us know! Letters@socialcorrespondence.com.

We are now on Facebook! Check out Social Correspondence on Facebook for posts, comments, photos and short pieces.