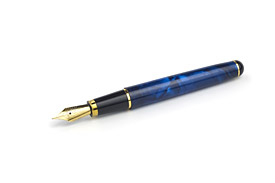 For many years, I wrote with a fountain pen. Unlike some of my friends, who have used the same pen for 20 – 30 years, none that I have owned was special or memorable enough to be deemed irreplaceable. Eventually, the last of my fountain pens began to leak, hastening its reunion with its brethren in the landfill. I turned to what soon became my new favorite, a disposable pen that I first discovered in Paris, made by an American company, which I now buy by the dozen. That is, until recently.

My friend Deborah and I share the same birthday, and she has a knack for always finding the perfect gift. One year, it was beautiful, vintage, below the elbow gloves. Another year, it was a book by Adam Gopnick. And so on. She never fails to find something thoughtful that genuinely delights me. But no previous gift was as perfect as last year’s, a beautiful, sleek, silver fountain pen that feels exactly right in my hand. It could not be more perfect, except for one little thing.

After I received the pen, I carefully removed it from its packaging, a stylish black cylindrical tube, enclosing a slim velvet drawstring bag. I couldn’t help but stare at the pen inside, in awe of its beauty. It even came with its own custom-sized ink cartridges.

At home that night, I eagerly pulled the pen apart and attempted to insert a cartridge, only to find that the parts no longer fit together. There was a long, skinny plastic twisty thing; a teensy little spring; a miniscule, doughnut shaped object; an empty, refillable cartridge. I puzzled over it, but could not figure out how to return things to the order in which they belonged.

I turned separately to two friends, each of whom is much more clever than I about spatial relationships and how things work, but even they could not fix my problem. Now things are even worse. The twisty thing is stuck in the base of the pen, where it refuses to come out, and the little custom cartridge, from which ink flowed to the pen nib for the briefest of moments, is leaking.

My solution? I went to Flax, an amazing local art store (that does not carry the silver pen) and bought a new fountain pen. It too is beautiful, and writes nicely. It comes from an old and reliable pen and drawing pencil manufacturer and uses standard cartridges. But much as I love it, I still want to use that sleek, elegant silver pen.

Perhaps the start up company that makes it will not only replace or repair the defective pen, but also show me how to put all those little parts back together. Once I have the knack, I feel sure that I will never part with it, and that many future letters will be written with pleasure, using a beautiful object. But first, I have to muster up the courage to ask.

Financial Woe for the USPS