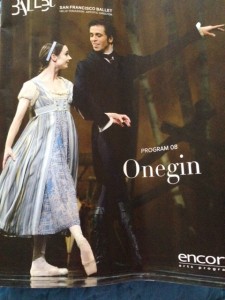 The San Francisco Ballet has concluded its repertory season, ending on a high note, even for this world-famous ballet company, with the magnificent production of the Onegin ballet. The story, based on the poem Eugene Onegin by Alexander Pushkin, with libretto by John Cranko, is performed to the beautiful music of Tchaikovsky. References to letters are significant to the drama.

The Onegin ballet enacts the story of Tatiana, a young woman living in rural Russia, and her love for Onegin, the worldly, elegant friend of her sister Olga’s fiancé, Lensky.

In the opening act and scene, Tatiana’s pale blue gown conveys her innocence as she attempts to avoid the party festivities around her by burying herself in a book. It is her birthday, and many have come to celebrate. The corps de ballet swirls around her in a frothy creamsicle extravaganza of peach-colored gowns and khaki-colored uniforms, all in seemingly effortless grace. A pas de deux between Olga and Lensky conveys their love, tenderness and joy with one another, but Tatiana remains oblivious to it all, absorbed in her romantic novel.

It is when Onegin enters the stage, somber, dark and handsome, that Tatiana comes to full life. She is instantly smitten, but as they stroll and dance together, his elegance and charm cannot hide his aloofness and disinterest in the country girl. Undeterred and giddy from the encounter, Tatiana is unable to sleep that night, and by candlelight, she pens a love letter to him. In the morning, she entrusts it to her nurse to deliver.

Staging is important to this ballet. Throughout the three acts, three translucent curtains filter the stage and introduce different tableaux before the dancers are fully revealed. The first curtain mirrors a single image, that of the Russian-lettered signature of Eugene Onegin. The second curtain is patterned with the subtle overlay of a letter, Tatiana’s letter, handwritten in Russian, to Onegin. The third depicts a forest, where characters flee with their thoughts, and where Lensky and Onegin fight their duel.

Given his dark, yet sophisticated character, Onegin behaves like a cad. He seeks out Tatiana, only to cast her away, and despite her tears and distress, rips her letter to shreds and throws the scraps on the floor. He flirts ostentatiously with Olga, angering Lensky.  In short, he is smug and unbearable; yet still, he goes on to perform an even worse atrocity, one that brings heartsickness and sorrow to himself as well as to others.

Regretful, Onegin leaves not only the countryside, but Russia as well, and travels the world for many years. Eventually, he can no longer bear the loss of his homeland, and returns to St. Petersburg, where he attends the ball of Prince Gremin, a relative of Tatiana. The Prince, long enamored with his cousin Tatiana, has at last secured her hand in marriage. There at the ball, Onegin finds to his surprise that Tatiana not only has married the prince, but also has transformed into a tantalizing beauty, rich with intelligence, integrity and maturity.

Onegin is now in love with this new Tatiana. In the ballet, he writes her a letter, but in Pushkin’s poem/novel, he writes several letters, all of which she rejects. Frustrated in his endeavor to recapture her love, he appears at her doorstep, pleading with her to leave her husband and to come with him.

While torn between her passion for Onegin and her love for her older, loving husband, who waited many years to capture her affection, principle wins out. She demands that Onegin leave, never to return. He resists, but yet she insists. At last, he realizes that he will never win her back. He leaves, but Tatiana remains, clutching his letter in her hand.

It was all that and more. First premiered by Stuttgart in 1965, the ballet was performed to great acclaim for the first time in San Francisco in 2012. Watch for it in coming seasons. It is not to be missed.