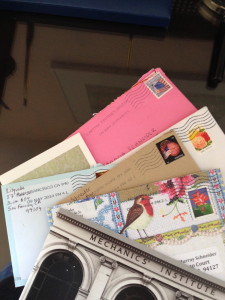 Letter writing and books seem to go hand in hand. Generally, people who write are readers. And people who love to read often aspire to be writers. Because letter writing is one of the most fundamental ways of writing, there are many genres of books about letters and letter writing.

The epistolary novel, a story that unfolds through a series of letters, is not an uncommon device, and dates back to the late 15th century. From Bram Stoker’s classic gothic horror novel, Dracula, first published in 1897, to The Guernsey Literary and Potato Peel Pie Society, by Mary Ann Shaffer and Annie Barrows, novels told through letters and documents are a unique way of telling stories.

In the realm of non-fiction, memoirs, biographies and history books rely heavily on letters and other historical documents, often including excerpts or entire letters within the text. Novels also may include letters or excerpts of letters that help to move the story along.

While letter writing dates back to antiquity, the historic origins of books about how to write a letter are less clear. The self-help or genre guides to letter writing date back at minimum to the 19th century. What Shall I Say? A Guide to Letter Writing for Ladies was originally published in 1898.

Some of these early guides can be cause for amusement. Ward Lock’s Complete Letter-Writer for Ladies (London, n.d.) states in its preface “some books on letter-writing are so grandiloquent as to be ridiculous.” The book then goes on to offer “straightforward everyday letters,” which today seem anything but straightforward. On rejecting a marriage proposal, for instance, the book advises: “Sir, While thanking you for your letter, I cannot conceal my surprise that you should think me capable of acting with the precipitancy which has characterized your step.”

Whether it is a practical guide to letter writing or a literary tribute to letters that piques your interest, here are a few of my favorite contemporary books about letters and letter writing,

Simon Garfield’s To the Letter: A Celebration of the Lost Art of Letter Writing (Gotham Penguin 2013) is a literary tribute to the value and integrity of communication in the form of a letter. “Letters have the power to grant us a larger life. They reveal motivation and deepen understanding. They are evidential. They change lives and rewire history.”

Garfield, a Londoner, covers the history of famous letters, their role in war and politics, the rise of the British postal service in the 16th century, and even letter writing manuals. For all that Jane Austen used letters as a plot device, he notes that her own letters were somewhat dull. Her first attempt to write Pride and Prejudice as an epistolary novel was unsuccessful. This book is full of such anecdotes about famous letter writers through the ages.

The Missing Ink, written by British writer Philip Hensher (Faber & Faber 2012), is another literary gem, a tribute to the “lost art of handwriting.” Hensher writes about the history of handwriting, its role in storytelling, and the ways in which handwriting becomes a part of a person’s character. He discusses pens, penmanship, letters of famous people and more.

Signed, Sealed, Delivered: Celebrating the Joys of Letter Writing by Nina Sankovitch (Simon and Schuster 2014), first reviewed in Social Correspondence June 2014, continues to be one of my favorite books about letter writing. Although Sankovitch also wrote about the history about letter writing, it was her personal experience of renovating a home, finding a cache of old letters, and relating them to her own family that most appealed to me.

Margaret Shepherd’s The Art of the Personal Letter (Broadway Books Random House 2008) is a how-to guide for those who are unfamiliar with how to write a letter. Shepherd discusses the selection of paper and ink, how to personalize a letter, and suggests how to express one’s thoughts for different occasions, including thank you, sympathy, congratulation, apology letters and more. See also Shepherd’s The Art of the Handwritten Note (Broadway Books 2002

Letters of Note: An Eclectic Collection of Correspondence Deserving of a Wider Audience by Shaun Usher (Chronicle Books 2014) is a beautifully designed, exceptional book, including 125 letters, ranging from E.B. White, Annie Oakley, and Eudora Welty to Emily Dickinson, Elvis Presley and Peanuts creator Charles Shultz. Many of the letters are reproduced in their original form, including handwritten, typed and illustrated. Not only does this book give a glimpse of the personal thoughts of the writers, it also is a most pleasurable read.

A SPECIAL LETTER FROM MY GRANDDAUGHTER AT Y CAMP