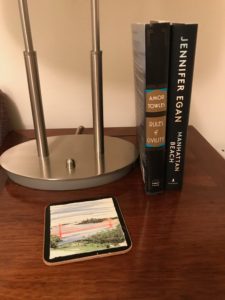 New enticing titles are on the horizon in 2018, but looking back, I would like to share some of my favorite books from 2017.

Many “best books” of the year lists are compiled near the end of the year – check out New York Times, Washington Post, NPR, and Publishers Weekly, to name just a few. While some of my favorite books are crossovers from these lists, and/or appear on local and/or national bestsellers lists, my lists are by no means comprehensive or definitive. The following reading suggestions are merely those that I found most enjoyable to read this past year.

In the category of Fiction, I have two hands down favorites: Amor Towles’ A Gentleman in Moscow and Jennifer Egan’s Manhattan Beach.  Each of these books is imaginative and intriguing, with language so rich and luxurious, they were hard to put down.

First published in 2016, the elegant tale of a Russian nobleman’s house arrest in a luxury hotel in Moscow in 1922 by the Bolsheviks, his survival, and the life he makes within the hotel originally escaped my notice. A Gentleman in Moscow became a word of mouth recommendation by several friends, and I am glad it did. It is a book to read slowly and savor.

I enjoyed A Gentleman so much that I turned next to Amor Towles’ first book, Rules of Civility, an international best seller first published in 2011. Set in Manhattan in 1937, Rules of Civility quickly became another of my favorite books in 2017 due to its gorgeous descriptions and intriguing plot and characters. Rules and A Gentleman in Moscow share an exploration of class, historical detail, and a Russian connection. It’s funny to think that these two novels were written by a former investment principal in New York, rather than a historian or Russian scholar.

Manhattan Beach by Jennifer Egan is another book to read and enjoy in leisurely fashion, despite the strong plot and story lines that make it a page-turner. The protagonist is a young woman who has the opportunity to become a Navy diver and underwater ship repairer during World War II at the Brooklyn Naval Yard. Descriptions of the grit and physical endurance required to work underwater were, for me, unforgettable.

Many librarians love mystery titles, and I count myself among them. My two favorite mysteries of 2017 are Sue Grafton’s Y is for Yesterday and Elly Griffith’s The Chalk Pit, the latest offerings by two authors who each has written a series of books featuring the same protagonists.

Several times this year I have pondered what Sue Grafton would do after she completed her final alphabet mystery novel, Z is for ? Alas, we will never know, as Ms. Grafton died in late December 2017, leaving her legions of fans in mourning. Against the backdrop of an elite private school in southern California in 1979, Grafton’s final book featuring the inimitable Kinsey Millhone, Y is for Yesterday, is both contemporary and timeless.

Forensic archaeologist Ruth Galloway is back solving mysteries in Norwich, England, exploring hidden tunnels below the streets in Elly Griffith’s The Chalk Pit. Caring for her young daughter and her relationship with Detective Chief Inspector Harry Nelson further complicate the search for a missing person. If you are not familiar with this series, I recommend starting with The Crossing Place.

Other strong contenders for my favorite books in the mystery genre in 2017 are Donna Leon’s Earthly Remains; Laurie King’s Lockdown; and Sarah Paretsky’s Fallout. Each of these writers is engaging and consistent and I recommend all three. 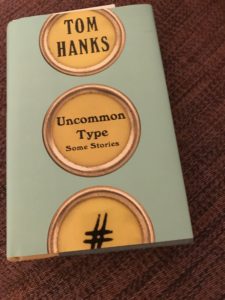 Ordinarily, I am not a huge fan of short stories. They end too soon, and I prefer to sink my teeth into longer works. That said, Uncommon Type by Tom Hanks is more or less irresistible.   Actor and filmmaker Hanks is also a typewriter collector, and each story within the book includes a photo of one of his vintage typewriters, as well as a mention of typing somewhere within the story.

Two non-fiction books that caught my attention in late 2017 are The Woman who Smashed Codes by Jason Fagone and Code Girls: The Untold Story of the American Women Code Breakers of World War II by Liza Mundy.

Elizebeth Smith (1892 – 1980) a young woman recruited by an eccentric tycoon to decipher secret messages in Shakespeare’s First Folio, became one of the most influential, albeit unknown, heroines of our time. On the estate of the tycoon, in Geneva, Illinois (a town I once lived in), she met her future husband, William Friedman. The Woman who Smashed Codes by Jason Fagone offers little known insights into the early development of modern intelligence.

By the time of World War II, 10,000 women served as code breakers in Washington, DC. As chronicled in Liza Mundy’s Code Girls, these women were recruited, worked in secret, and were never given credit for their difficult and clandestine work. Code Girls rectifies this injustice.

“So many books, so little time,” a quote from Frank Zappa, has never been truer. Throughout the year, I collect lists of books to read, titles I find in such publications as Library Journal, the San Francisco Chronicle Book Review, and the New York Times Book Review, as well as best seller lists, word of mouth, and more.

Regardless of how you select books to read, I wish you many happy reading hours throughout the coming year.  Please feel free to share your favorite books in the Comments section!

On Being a Grandparent