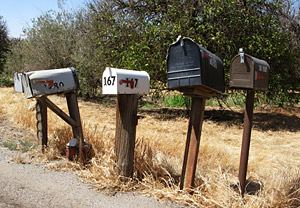 Kay Christensen Roberts and her sister Jane grew up in Cumberland, Wisconsin, a rural town with a population of slightly over 2,000, then and now. Growing up in Cumberland in the 1950s, Kay became a devotee of the public library and especially of the town librarian, Katherine Robinson, who may have been her namesake.

Katherine the librarian and Kay’s mother Aleda Christensen were good friends. The Christensens lived fairly near to Katherine’s mother and, as Kay recalls, “when I was very little I would toddle up to Engesether’s, where I think I spent as much time as I did at home.”

As Kay grew older, Katherine became a friend. “I remember once she invited me, just me, for lunch.  I was just a little kid, but she set the table with her lovely gold silverware and we had a real grown up lunch, just the two of us.  I’m sure I was not yet 10.”

On another occasion, Kay wrote, “One Sunday I realized in horror that I had not done a report for the next school day.  I went to Katherine, who let me into the library (probably telling me that she had some work to catch up on anyway) and I wrote up my report on the duck-billed platypus. I hope I got an A.”  In addition to being a special friend, Katherine encouraged Kay’s love of reading.

It is therefore not surprising, that when Kay left home to attend college in Madison in 1958, married Ray Roberts, and moved to San Francisco, her communication with Katherine continued through letters and occasional visits. Kay’s mother Aleda also moved to the Bay Area some years later, but news continued to flow back and forth through letters to and from Wisconsin between Katherine and Aleda. Katherine was very proud of “her girls,” Jane, the music whiz, and Kay, the librarian. 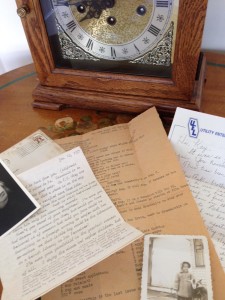 “Dear Aleda,” she wrote in a letter dated Jan. 12, 1977, typed in a lovely italic script. “It was so good to hear from you. California sounds like a good place to be. Wisconsin is in the throes of a very good snap. On T.V. they are right now telling us that a storm is on the way. A reading of -60 was verified near Rice Lake.”

Katherine continued, “Aren’t you proud of your daughters? I’m sure you had dreams of success for them, but would you have believed it if someone had told you Jane would be travelling to a foreign country to confer with her editor, or that little Kay would be the librarian in a branch library in San Francisco?”

One of the treasures in these letters was the inclusion of a newsletter, written, edited and published by Kay Christensen as a child, called The Once Every Two Weeks Rush.

The Rush was quite entertaining, both newsy and funny. “Because of a slight mishap this week,” wrote Kay, “there will be no Riddles this week.” But jokes were plentiful: “Passerby: How’s business?” “Sicisors (sic) grinder: Fine. I never saw things so dull.”

“What’s the hardest thing in learning how to skate?” “When you come right down to it, the ice.”

News in The Rush included the birth of a baby, a “shooping” trip to Minneapolis, an overnight stay in the hospital for a boy hit in the stomach with a baseball, and more. “Little Kay” concludes that edition of The Rush with a recipe for “Apple sause (sic) cake, and the unhappy notice “IMPORTANT!!! This is the last issue of the Once Every Two Weeks Rush.”

Katherine served as the town librarian for 35 years, but following her retirement, she downsized to a senior living apartment. In the process of moving, she dashed off a handwritten note to Kay, in which she shared childhood photos of Kay and mementoes that she had carefully preserved, including a copy of The Rush. The italic script of the typewriter is missing, as is the stationery, which has been replaced by a commercial business notepad, evidence of a life in transition.

Clearly, the -60 degree weather in 1971 did not affect the longevity of these two remarkable women correspondents. Aleda Christensen died in 2004 at the age of 101, and her friend Katherine Robinson passed away in 2010 at the age of 98.

“Letters leave history as this email will not,” said Kay Roberts. As part of preserving her family history, she has added Katherine’s letters to her own family files.

Catherine Roberts. The Once Every Two Weeks Rush, 1951.