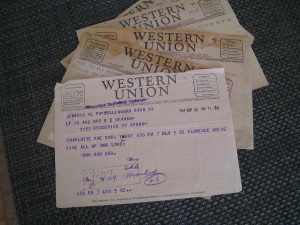 More than thirty years before Alexander Graham Bell patented the telephone, Samuel Morse found a way to transit messages through electrical pulses across a series of wires. It was 1841, and communication by Morse code became the foundation for the telegram system, and later was adapted for radio communications.

Throughout history, telegrams have played an important role. President Abraham Lincoln used telegrams to communicate with his Generals during the Civil War. According to George Mason University’s History News Network, “When Lincoln arrived for his inauguration in 1861 there was not even a telegraph line to the War Department, much less the White House.”

Previously misunderstood and underutilized, the technology under Lincoln’s leadership became a key strategy in the North’s victory in the Civil War. According to the Western Union website, the first transcontinental telegraph line across North America was completed in 1861. The first telegram sent across country was to President Lincoln, assuring him that California would stand by the Union.

Although a number of companies went into the business of transmitting and delivering telegrams in the mid-19th century, the most prominent and long-lived service was Western Union, which came into being in 1856 through the merger of two competing companies. Western Union became the industry standard, and continued to deliver telegrams until 2006.

Telegram! Modern History as told through more than 400 witty, poignant, and revealing telegrams, by Lisa Rosenkrantz (Henry Holt & Company, 2003), shows the role and relevance of telegrams throughout history through hundreds of examples, including those sent during World War I, the Great Depression, Pearl Harbor and the Cold War.

Telegram! also chronicles the more modern and playful side of this communication tool. Jerry Lewis, while dining with Henny Youngman, slipped away from the table when a mob of Lewis’s fans surrounded them. Youngman sent a telegram to Lewis from the lobby, which said, “JERRY. PLEASE PASS THE SALT. HENNY”

Telegrams were used extensively in the film business. One of my favorite actors, Michael Caine, apparently did not make a memorable first impression. According to Telegram!, Paramount had this to say: “ACTOR PLAYING BROMHEAD (in Zulu) SO BAD HE DOESN’T EVEN KNOW WHAT TO DO WITH HANDS…SUGGEST YOU REPLACE HIM.”

LGBT hero Harvey Milk also used the telegram upon occasion in his personal correspondence with his close friend, Sue Davis Alch. In a Western Union telegram dated Aug. 27, 1958, he wrote: “MERRY CHRISTMAS AND HAPPY BIRTHDAY. EARLY FOR ONE, LATE FOR ANOTHER BUT LOVE FOR BOTH. HARVEY.” 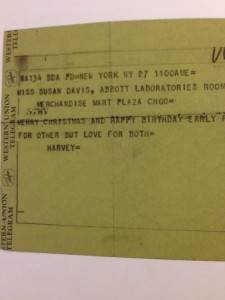 In 1941, Elizabeth Marie Montgomery, my mother, relocated from her childhood home in the Pacific Northwest to San Francisco, where she worked for the Metropolitan Life Insurance Company in a magnificent building on Nob Hill, now the site of the Ritz Carlton hotel. This must have been a heady experience for a young woman who was raised on a rural dairy farm. World War II raged in the background, and life was uncertain.

In 1943, she met my father, Edward Graham, an Ensign in the U.S. Navy stationed in Tiburon, California, at the Junior Officers’ Club in San Francisco. She chronicled their courtship and marriage in a U.S. Navy scrapbook, a lovely, deep blue-colored album, with a war ship embossed on the cover in white and gold. Their early history is documented through photos, cards, restaurant menus, and yes, telegrams. They were married but a few months later, on June 13, 1943 at the respective ages of 20 and 23. Four people served as their attendants, including one of my mother’s sisters, Roberta, at Grace Cathedral in San Francisco.

My mother’s brother Richard, who also was stationed in San Francisco with the U.S. Navy, and once roomed with my father, wrote from Bellingham, Washington:

RECEIVED WIRE SORRY WE ARE UNABLE TO BE THERE OUR THOUGHTS ARE WITH YOU SEE YOU THIS WEEK END LOVE TO BOTH FROM MOTHER AND DAD.

My father, likewise, received two telegrams. The first, from his mother and grandmother, sent from Fort Collins, Colorado on June 11, 1943, read:

ENSIGN E E GRAHAM 2415 FRANKLIN ST SFRAN= DEAR BETH AND EDDIE. SORRY WE CANT BE WITH YOU BOTH TODAY. HAVE A GRAND HONEYMOON. SENDING LETTER TO MO-MO (my father’s aunt) LOVE = MOM AND BRINT.

And from his friend, Alfie, from Fort Collins:

A later telegram, sent from Bellingham, dated September 24, 1944, announced the birth of my cousin Charlotte:

Despite the whirlwind courtship and early marriage, my parents remained married until my mother’s death in 1984, forty-one years later. Their letters to one another during the war, however, to my great dismay, were destroyed.

Telegrams have not been part of my life. In the 1980s, fake telegrams were extensively used in direct mail marketing. Therefore, anything that looked like a telegram was dispatched directly into the trash. In 1986, I received my one and only telegram from an international company called Graphnet, which for some reason I had the good sense to fish out of the wastebasket. It was from my friend Pamela, sent from Pretoria, South Africa, and read:

URGENT PLEASE CONFIRM OK VISIT YOU MAY 13 TO 17.

Yes, this was definitely okay. Today, such news would be handled through email or an international telephone call. This telegram, however, became a permanent record of a memorable time and reunion with a good friend and long-time correspondent. Sometimes we forget the details of our own history. Kudos to the telegram for keeping it alive!