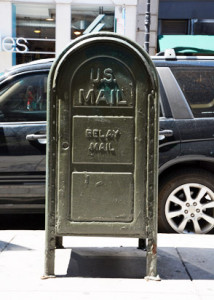 Letter writing may be on the wane, but each week, stories turn up from around the globe on letter writing, the postal service, handwriting and other related topics, both as features and as news stories. Here is a sampling of what’s in the news, published in September and October 2014.

Amazon Fresh Orders Soon to Arrive from the Post Office

A market test in San Francisco, approved by the U.S. Postal Regulatory Commission, would allow the USPS to deliver groceries from AmazonFresh to individual households between the hours of 3 a.m. – 7 a.m., effective in late October. The trial period could be as long as two years.

Batman has turned 75, and the U.S. Postal Service has issued a series of images in a new commemorative stamps. Philatelic purists are not happy.

In a clever scam, newspaper subscribers in California are receiving fake renewal notices. Be wary, warns the Attorney General. If something looks suspicious, call your newspaper directly to verify.

In recent years, the U.S. Postal Service has consolidated facilities and operations, dramatically reduced jobs through attrition and improved revenue growth, but these measures alone are insufficient to curb the growing debt. The authors, through the Senate Committee on Homeland Security and Governmental Affairs, have a plan to provide more flexibility to the U.S. Postal Service, reduce the amount of money currently required to fund future retirements and still provide services to rural areas without cutting costs to the bone.

The U.S. Postal Services takes photocopies of the exterior packaging of all U.S. mail, a program called “mail covers.” Initiated over a century ago and used primarily for mail sorting purposes, mail covers may be retained for up to 90 days. A 2013 audit revealed that over 50,000 requests were made by law enforcement agencies within that year.

Letters We Love to Receive

Your Handwriting/Your Signature – Do They Matter?