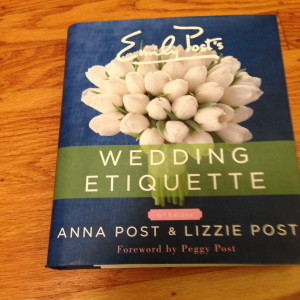 I have a new best friend. Her name is Emily – Emily Post, that is. Emily has been guiding me through the intricacies of wedding etiquette, especially with regard to written correspondence.

As my own wedding took place nearly four and a half decades ago, I am a bit rusty on protocol. But while serving as first lieutenant for planning my daughter’s Valentine’s Day weekend wedding, I learned many valuable tips from Emily.

Of course, the one and only Emily Post no longer is with us, but her sage and gracious advice has been updated by two of her great-great-granddaughters, modern etiquette experts Lizzie Post and Anna Post. Emily Post’s Wedding Etiquette, 6th Edition (Harper Collins and The Emily Post Institute, 2014) has been a down-to-earth, straightforward and practical guide for me over the past six months.

Had I consulted more diligently with Emily, we would not have overlooked one very important fact: the design and production of wedding invitations takes time. The timeline (not to mention the budget) already precluded engraved or letterpress invitations. This was painful, because I love beautiful stationery and cards, but probably all for the best, it was too late to get carried away.

Emily, of course, was not the only planner who helped us design the invitation. The professional staff at Paper Source offered a seemingly unlimited array of options, from the size, shape, color and cut of the paper to various methods for printing the cards. Their extensive style guides included more typefaces than I had ever dreamed existed, and their expert designers and printers in Chicago produced an elegant invitation.

About those wispy thin tissue papers that one may find nestled on top of the wedding invitation card: these are mostly optional today, according to Emily. Originally, they were there to keep the ink from smearing. We chose a printing process called thermography, which entails much less time than engraving, and produces raised letters applied to the card by heat, so ink smearing was not an issue. But the cards came with tissues and we chose to use them anyway.

According to the often snarky Miss Manners, one of my favorite columnists, “tissues are provided to prevent the engraving from smearing after the folding…You don’t need them if it’s not real engraving, but in that case you may want them for motives Miss Manners will not mention.”

Okay, I confess. I used them because I thought they made the invitation look classy.

Working at the San Francisco Main Library, with its extensive collection and resources, has its perks. In addition to Emily, I drew upon the collective advice of many other authors, including Wedding Planning for Dummies (Wiley, 2013), the Amy Vanderbilt Complete Book of Etiquette (1995) and Miss Manners Guide to Excruciatingly Correct Behavior (Judith Martin, 2005). I avoided, however, any title that might give license to an e-invitation. According to the Dummies guide, citing The New York Times, “one in five couples now issue wedding invitations by electronic means.” Most likely, and unfortunately, in my opinion, this will become the norm in the not too distant future.

Emily Post’s Wedding Etiquette offered many other helpful tips about invitations, including appropriate wording options, how to layer the various pieces entailed in a wedding invitation into the envelope, and more. According to multiple etiquette books, including Emily, wedding invitations should be addressed by hand or by a calligrapher. I hand addressed the envelopes, with the help of my good friend Katharine, and part of the fun was receiving all of the reply cards in the mail. In my household, we’re still doing our best to keep the post office going!

One of the wedding guests, the delightful Chris who also served as head usher, confessed that he is generally confused by the large M_______ that appears regularly on wedding reply cards. I agree that this seems to be a bit of an anachronism. While the M can mean Mr., Messrs., Mrs., Ms. or Miss, many people prefer none of the above, but prefer to list the respondents’ name(s) without a social title.

Now that the wedding is over, my daughter and her husband have a new task: thanking each guest for their presence, and if appropriate, their gift. While perhaps daunting, the start of this task has not been put off. Warm, heartfelt, charming notes were written and mailed as early gifts started to arrive (I know this because my friends have told me so!).

Another word about thank you notes: the bride and groom (or brides or grooms) do not have a year to send them. Not even six months. Where on earth do these myths come from? In fact, thank you notes should be written as soon as a gift arrives. This not only is the proper way to do it, but it also makes more sense than procrastination; otherwise, it becomes an onerous task. According to Wedding Planning for Dummies, thank you notes must be handwritten and sent within a month.

Life’s exigencies often prevent busy people from doing things “according to Hoyle” (or Emily Post, in this case). Not writing a thank you note is never an option, but if the timeline falls behind, those delayed expressions of gratitude are never too late, and always appreciated.

For any readers planning weddings in the near future, I wish you as happy and glorious a day as I had, as mother-of-the-bride!

Letters in the Mail