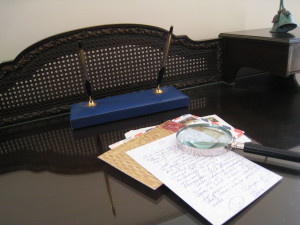 In the words of the great P.D. James, 93-year old doyenne of English crime fiction, “No literary form is more revealing, more spontaneous or more individual than a letter.”

But what distinguishes some letters from others, those letters that are pure pleasure to read, opened with eager anticipation? The letters that are read many times over, and then saved, in a drawer or file, box or basket?

To some extent, the answer lies with the recipient’s relationship with the sender. Letters from a spouse, child, beloved aunt, cousin, grandmother, lover, close friend, are surely the ones that are carefully refolded and saved. They may or may not be well written or engaging, (though usually, they are!), but they are memorable, nonetheless.

When I left home for college, my mother saved every letter I wrote. When she became ill at a relatively young age, some ten years later, she gave them back to me. “I thought you might enjoy reading about how you felt during that time,” she said. “For when your own daughters leave.” But upon re-reading my words, I found them shallow, without wisdom, with little to instruct me. Several years later, while stirring up a dust storm during a cleaning spree, I nearly tossed them.

Now, I am happy that I didn’t. A quick glance reminds me of a small history of my late teens and early adult life, friends I met, dates I went on, events I attended, including “Big Game,” Blue and Gold versus Red, where the “good guys” at my alma mater actually won. Things I don’t even remember. And yes, the letters included some self-centered whining about money and having to study too much, but I also managed to record my feelings about friends, independence, a campus strike, and concerns about finding a post-graduatation job, as well.

My daughters have written engaging letters from a very early age, letters that have brought me much joy; they are tangible, hand-written letters, letters to read and re-read, years later. Some were written as school exercises, some as cards for special occasions, such as birthdays, Mother’s Day and holidays; some were written during college, and some when they became adults, with their own lives and careers. Among my favorites is a preschool, illustrated profile of “Mommy,” who “likes to swim, has brown eyes, and likes to clean the sink.” At least one of these attributes is, and was, correct.

I also cherish the letters I receive from long-time friends and family members, including: my prolific, always newsy college friend (mostly about horses and skating); the too infrequent, artistically written and illustrated notes from another close friend dating back to early adulthood; my cousins, my most long-time correspondents; and many other, more recent correspondents. Each of the letters is appreciated, as is every thoughtful note or card I have ever received in the mail.

Over the years, I have asked friends what their definition is of a “good” letter, and most often, the response is that it is personal, that it acknowledges mutual interests, the other person’s activities, and shares news and information.

One of my favorite correspondents ever was my friend Pamela. We first met when I spent two months in Hertfordshire, England as a young adult. Pamela and her family sponsored my home stay through the Experiment in International Living. She was just old enough to offer me wisdom and advice, but not too old to be my friend. Over the years, I have thought about why her letters were so special to me. Partly, it was because she went on to live in exotic and far away places, raising Brahmin bulls in Kenya, buying a historic cottage in Cornwall, living in Rhodesia before it became Zimbabwe, marrying and settling once again in the land of her birth, South Africa. Her handwritten letters, which were at first hard to decipher, but later evolved to type written, told of her divorce (her handsome husband fell in love with his secretary), the activities of her four children, including an adult daughter, who I never met; her remarriage to a South African, and the trials of her elderly, failing mother. Most of what attracted me, however, was her storytelling skills, and the personal, long-time connection I felt with her.

Each of us develops our own style. I receive some letters that read like a news blast or diary entry, letters which seem to be written for a broader audience, but lack follow up to questions I might have posed or comments on things I might have written.

Ian Jackson, collector of “imperfect correspondence,” shared a quote on the subject of impersonal letters: From a letter from the British poet Philip Larkin to his girlfriend Monica Jones, dated 8th December 1956:

“I’m sorry if I neglect to answer things in your letters — to some extend I’ve ‘always’ done it: my parents, and Kingsley [Amis], complained similarly. There may be several reasons — carelessness, forgetfulness perhaps, tho’ I always write with your last letter beside me (some may get missed thereby). I’ve always tried to avoid the ‘I-was-interested-to-hear-you-had-been-to-Sevenoaks-you-would-find-Uncle-Edgar-very-changed-I-can-just-see-you-trying-to-appreciate-the-roses!’ kind of letter, a sort of repetition of the one received. Sometimes I don’t answer because I can’t think of anything to say, or something “profitable” to say . . .”

These days, not all of us have a “style,” because our correspondence is so infrequent. Certainly, we are all “imperfect correspondents.” The important thing, however, is that we write. Letter writing is how we stay connected and how we communicate, whether typed or hand written, by text or by email, perhaps even by tweeting, if we are very brief. Without doubt, most of our letters are impermanent. But for the moment, they are the essence of what connects us to one another.