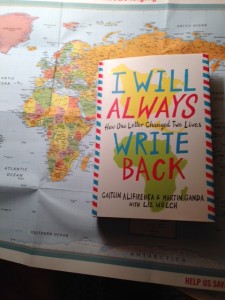 From time to time, a sweet story about pen pals crosses through my news feed. These stories, which originate from all over the world, often involve long-time pen pals who meet after many decades of knowing one another only through letters.

I Will Always Write Back by Caitlin Alifirenka and Martin Ganda, with Liz Welch (Little Brown and Company 2015) is a different kind of story. It tells of two young pen pals who, through their six-year correspondence, bridged politics, perspectives, miles and cultures in ways that changed not just their lives, but many others.

In 1997, Caitlin was a 12-year old seventh grader in a Pennsylvania town, the only daughter in a family that was comfortably well off yet not wealthy. She was a bit of an under-performer in school. Her chief interests were popular music and culture, clothes and jewelry, boys and hanging out with her friends.

In English class, Caitlin and her classmates were given the assignment of writing a letter to a pen pal, with a broad range of countries from which to select their correspondents. While most of her classmates chose a country in Europe, Caitlin asked for Zimbabwe, a country she knew nothing about, because it sounded exotic and interesting. She was the only student to select an African country.

Martin Ganda, her new pen pal, was a high performing student in Mutare, the third largest city in Zimbabwe. His parents placed a high value on his education, but his family was quite poor. His father worked in a factory, and the family of five lived in a single room with another family. In the course of his correspondence with Caitlin, Martin’s situation became even worse, as Zimbabwe experienced a deep recession.

At first, Caitlin overlooked the signs that Martin’s life and opportunities were so much more limited than her own. But one thing was clear – Martin became a good friend, a person with whom she could share her thoughts and feelings, a friend who would always empathize and understand.

It was easy for Caitlin to send photos of herself and her family to her pen pal, but for Martin it required greater effort, including hiring an expensive, professional photographer. The gift of a t-shirt from Caitlin nearly doubled the size of Martin’s wardrobe. At times during their correspondence, when the school was no longer able to subsidize the stamps, Martin worked grueling jobs, such as carrying luggage for travelers, just to have money to pay for the postage.

With Caitlin’s growing empathy and awareness, coupled with Martin’s increasing trust and willingness to share his challenges, she grew to care more about her young friend than she did about day-to-day pursuits. Using money from babysitting, Caitlin began to send small gifts of money, helping to feed Martin’s family, and enabling him to devote his time to school rather than working at low-paying jobs. Caitlin’s parents, at first skeptical, also grew to care about and lend support to Martin, his family, and his future.

A few years following the start of this correspondence, Martin was accepted to a prestigious private high school in Zimbabwe; his admission to a school with an already at capacity enrollment was based on his high grades, devotion to study, persistence, and the financial sponsorship of Caitlin’s parents. Martin’s family, like many others in Zimbabwe, had met severe setbacks. His father lost his factory job and his mother had a stroke. Martin’s future was their only hope for a better life.

Eventually, Martin gained access to a computer at school, and used it to correspond with Caitlin’s mother, who by then had made it her personal mission to find a scholarship for Martin to attend college. They exchanged emails several times a day.

Caitlin, however, still preferred their written correspondence. “I saved my thoughts and feelings for pen on paper. They felt more tangible and permanent, a real connection,” she wrote.

…..If you like stories about pen pals, you may enjoy these stories recently in the news:

After decades of writing, friends finally meet by Kelsey Jukam, Cayman Compass (Cayman Islands), Nov. 10, 2015. A chance 1947 encounter between a beautiful young woman in the Cayman Islands and a British soldier led not to romance, but a lifetime bond of correspondence.

Sincerely, Your Pen Pal: Middle-aged Musings: The bond of pen pals is strong & can span decades by Robin Layton, Editor. The Daily Courier (Prescott, Arizona), Nov. 15, 2015.  An editor share readers’ stories about pen pals, some dating back as far as 60 years.

Vietnam ‘Love Letters’ inspire book, album by Pam Kragen, San Diego Union-Tribune, Nov. 11, 2015.  Author and musician Alex Woodward wrote a book and produced a CD about the psychological affects of war, using letters from a Vietnam War soldier whose life fell apart after the war, and the reactions of his now adult daughter,

The Chain Letter Has Returned