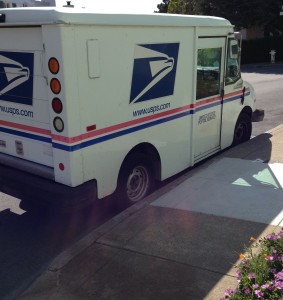 Mail trucks now roam the streets of San Francisco and other towns and cities in the U.S. on Sundays. In fact, this past Sunday, a mail truck drove right up to the front of my house, where the postal carrier hopped out and slid a package under the gate. But don’t expect to receive a birthday card from your best friend or a letter from your cousin on a Sunday anytime soon, as this new delivery service is limited only to packages from Amazon.

The U.S. Postal service delivers mail and packages to every address in the U.S., regardless of location, even to remote rural locations, giving it a distinct advantage to other delivery services. In fact, some of those other companies contract with the USPS to deliver mail to locations that are not cost effective for them to serve. The Amazon partnership adds yet another, albeit debatable, dimension to package delivery.

Postal service mail trucks, as well as long-time competitors such as UPS, DHL and FedEx, now have competition from new web-based mobile app companies. SHYP is an example of such a businesses. SHYP sponsored a table at the recent Friends of San Francisco Public Library Spring book sale (a not to be missed event, if you have never attended!). “You may never need to stand in line at the post office again!” their sign proclaimed.

“Forget packaging and waiting in lines. SHYP picks up your items, packs, and sends them anywhere in the world using the lowest cost, most reliable option,” reads their mobile site. SHYP, a San Francisco company that launched in March 2014, has grown by over 500% since July 2014, and also has a presence in Miami and New York City. A new round of venture capital funding from Kleiner Perkins Caufield and Byers enabled SHYP to beta test in the Los Angeles market and improve its technology.

TaskRabbit, another San Francisco start-up company, provides an online service that matches a need with a skilled person to accomplish the task. TaskRabbit, with a presence in “18 cities and counting,” has also advertised the service of having a person stand in line at the post office for you. Note: a visit this afternoon to my local post office took all of five minutes, including standing in line – there was none – and mailing a package.

“In the 1850s,” reads an online ad for TaskRabbit, “San Franciscans would have to wait in line for hours for their mail, which was shipped via Panama. Folks who were short on time would pay ten or fifteen dollars (over $500 in today’s dollar) to enterprising people – the 1850’s version of Taskers – for their spot in line. It’s a perfect example of people Living Smarter generations ago.”

In order for the postal service to stay competitive with these new business ventures, it must stay up to date. Currently, its mail trucks and other vehicles are suffering from age, outdated design and inefficiency. According to the USPS blog, “there currently are more than 212,000 vehicles in the Postal Service’s fleet, about 160,000 of which are delivery vehicles that are scheduled to be replaced.” The vehicles, which average about 10 miles per gallon, were designed 30 years ago, and are not equipped to accommodate the large number of packages being delivered today.

Despite continued operating losses, the USPS is entertaining proposals for designs for new vehicles, ones that would be fuel efficient and safer than the ones on the road today, with improved ergonomics for the carriers. After decades on the road, the old vehicles will be retired, but the mail truck of the future is yet to be determined.

Among the vehicle manufacturers expressing interest are Ford, Fiat, Chrysler and Nissan North America. Another company, the Workhorse Group, hopes to prototype an electric vehicle that would double as a drone launcher.

The USPS plans to issue a request for proposals in May 2015. The vehicle of the future, while several years distant, is becoming closer to reality.

Thousands Are Bypassing the Post Office With This App by Sara Ashley O’Brien. CNN Money

A Random Letter in the Mail